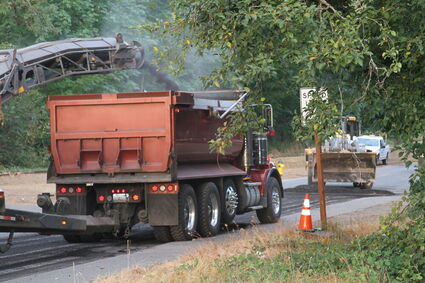 A crew last week prepares Park Street to be paved. The road will be closed from Sept. 21 to Oct. 1 as Granite Construction overlays asphalt from South Seventh Street to South First Street.

Park Street in Shelton will be closed from Sept. 21 until Oct. 1 as Granite Construction Co. of Olympia overlays asphalt from South Seventh Street to South First Street.

For decades, Park Street was a popular path to deliver logs to the Shelton waterfront, first for the Simpson Lumber Co. and now Sierra Pacific Industries.

Now that route is closed to logging trucks.

The Shelton City Council on July 20 gave final approval to awarding a $263,000 contract to Granite Construction to overlay asphalt on Park Street from South Seventh Street to South First Street. The council gave preliminary approval at its July 6 meeting.

The city's Transportation Benefit District provides the finding for the project.

In July, crews upgraded a drainage pipe that runs from Park Street to Goldsborough Creek near Seventh Street. Several property owners extended sewer and water services to their undeveloped lots prior to the paving project.

Once the paving project is complete, companies that offer gas, cable and telephone will not be allowed to tear up the road to install their utilities.