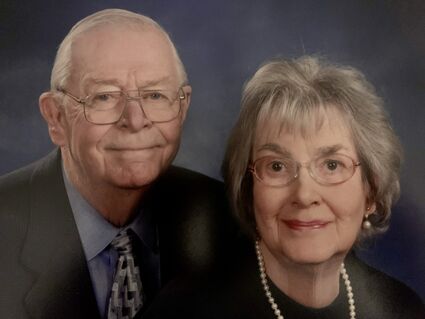 Ina Mae Kupker was born on January 15, 1931, to Emma and Henry Kupkerin Albion, Nebraska. She spent most of her childhood on the farm with her Aunt Josie and Uncle George. She moved to Charles City, Iowa to attend high school. After graduating, she went to work for the Oliver Company where she met James Pollock, one of the plant engineers. She and Jim married on September 3, 1950, and they celebrated 70 years of marriage in 2020.

They had two daughters, Kathy and Karen, and the family lived in Des Moines, IA, Dubuque, IA, Niles, MI, and Chico, CA, before settling in Klamath Falls, OR in 1969. When her daughters were young, she devoted her time to taking them to swimming, dancing, piano, and riding lessons and serving as a Girl Scout leader. Later she was involved in PEO, youth and other ministries at First Presbyterian Church in Klamath Falls, and was a founding member of the Assistance League of Klamath Basin. She developed many deep and lasting friendships over her lifetime.

In 2017 she and Jim moved to Shelton, Washington to be near family. Family was the most important thing to Ina Mae. She was happiest when all of the family was together. She was an amazing mother, grandmother and great grandmother. Each of the grandchildren has their own special memories of time with "Mimi."

Ina Mae passed away on August 16, 2021, just seven months after losing her husband. She is survived by daughters Kathy Burleson and Karen Pollock, grandchildren Michelle Endicott (Rick), Ryan Burleson (Amanda), Sean Burleson (Bhel), Michael Ko, and Maria Pollock, and great grandchildren Logan, Claire, Parker, Hope, Mercy, Justice, and Grayson as well as three nephews, one niece, and one cousin. She will be deeply missed by all who were fortunate to know her. A service will be planned for a later date.